The blog title is taken from a Pearl Jam song, and, while Eddie Vedder IS a huge baseball fan, and rarely talks publicly about the content of his lyrics, there is a pretty fair amount of speculation that the song was, in fact, about then-President George W. Bush.  There was a pretty heavy dose of vitriol dished out at Dubya during his administration.  It was during his Presidency that I first saw a shirt with his visage and bearing the words, “Not my President.”  I never saw conservatives saying the same thing about Barack Obama – I think most simply had enough respect for the office, if not for the man IN the office -but they certainly made their displeasure at his policies pretty well known.  Now, President Trump has been in office for about six months, and it’s been half a year of complete meltdown from the left.   The political hatred spewed out by both parties in the years since Dubya has made his Presidency look relatively tame by comparison.

When we first went to war in Iraq in the months following 9/11, I tried my hand at a few political cartoons, and, being an Independent, I tried to make fun of all sides equally.  The idea for the one with the ViewMaster was given to me by my friend, Will.  He might have come up with the whack-a-mole concept, too.  I know for sure the Dr. Strangelove reference was all me.  I think I also have to take credit for the Geraldo one.  I probably could have left off the second page of that one.  Nobody actually LIKES Geraldo, but the ending I gave him was a bit harsh, and, in the light of things that later happened with ISIS, it’s not something I would actually WISH on anyone.  It was just fueled by anger over the fact that he basically gave away classified intel pertaining to the location of US troops on the ground over live television.  Nonetheless, I’ll post it here in the hopes that it amuses more than it offends, and, if it offends anyone later, I’ll take it down.  Apologies in advance to Mr. Rivera and his family. 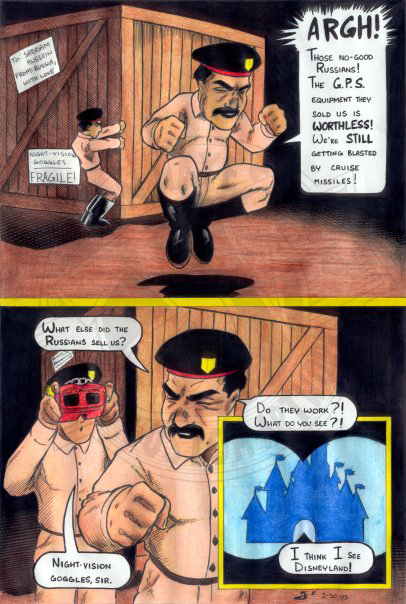 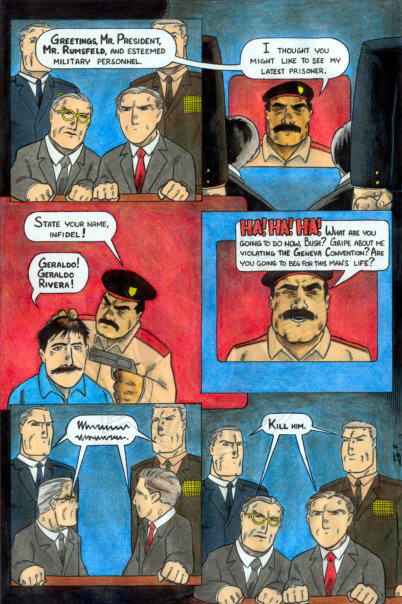